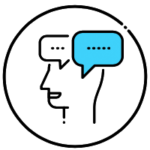 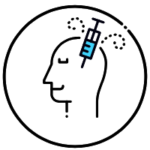 So named for its funky, almost noxious odor, Gas Mask is a pungent indica-dominant hybrid. Created by Washington State-based growers Pacific NW Roots, Gas Mask is a cross between Cherry Pie and a specific phenotype of Alien Kush. What results is a seriously dank strain with an exceptionally long-lasting high. Sure to impress both cannabis newbies and veterans, Gas Mask’s THC content has been measured at between 20% and 27%.

Flowers of Gas Mask establish the strain’s bag appeal right away, with large flowers that cling together in tight, conical formations. The internal composition of these buds shows a strong indica influence, with a solid core made up of tightly-coiled leaves. These leaves themselves are a dark shade of forest green and are occasionally punctuated by shades of blue and deep purple. Corkscrewed orange pistils and sticky, cloudy trichomes add additional visual interest.

When properly cured, Gas Mask buds pack quite an aromatic punch — pungent fumes of gasoline waft up from flowers, mixed with some skunky overtones. Grinding up these buds, meanwhile, releases more of a mellow, earthy aroma. When combusted in a pipe or a joint, Gas Mask burns with a very acrid, sour smoke that may cause smokers’ eyes to water. On the exhale, this smoke has a tangy and slightly nutty, cocoa-like flavor.

As might be expected of such an indica-inflected strain, Gas Mask’s high can take several minutes to reveal itself. Eventually, users are struck with heady sensations like a constricted feeling around the temples and cheekbones; flushing in the cheeks or an increase in salivation are also commonly reported as the high kicks in. As these unfamiliar tics die down, smokers are immersed in an altered state — visual or auditory stimuli may be subject to weird distortions like a flattening of depth perspective. Trippy phenomena like a sense of time passing more slowly are also possible. Those who enjoy these psychedelic experiences can intensify them with moody media like a favorite playlist or a visually dynamic movie. Aside from these spacey, dreamlike properties, though, Gas Mask doesn’t impart much of a mental edge and consumers who want to take advantage of some intense thoughtfulness may be disappointed.

After about an hour, intense physical feelings start creeping in to complement Gas Mask’s weighty mental effects. Smokers who may have been active or out and about may start to feel sluggish and might want to make a mad dash for the comforts of home. Those who are already lounging, on the other hand, can begin to feel like they’re sinking into the furniture. Increased intake can result in full-on couch lock, rendering any activities other than binge-watching or snacking fairly unlikely. Because of this steady decline into sedation, Gas Mask is recommended for evening or nighttime consumption.

Gas Mask’s mostly downbeat vibes can also have several uses for medical cannabis patients. The strain’s ability to regulate mood can help to temporarily improve symptoms of stress, depression, anxiety, and even PTSD. Gas Mask can also dull physical pain, taking the sting out of common inflammations like headaches as well as chronic conditions like COPD or lupus. This bud’s ability to induce the munchies can also serve as an appetite stimulant for those suffering from diminished hunger, whether due to digestive conditions or to invasive treatments like chemotherapy. In a sufficiently relaxed set and setting, Gas Mask may even be an effective remedy for insomnia. Because it has a lower than average risk of obsessive, recursive thinking, Gas Mask is a good option for patients who are prone to paranoia or who have a low THC tolerance.

This heavy indica is a luxurious way to take the edge off of a long day or work. If you’re toking in public, though, be wary of Gas Mask’s extreme pungency and take any needed precautions.

Be the first to review “Gas Mask – AAAAA” Cancel reply