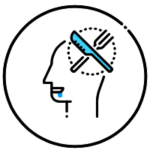 When you think of the typical cannabis experience, what comes to mind? For many, it’s hunger and relaxation. If that is what you’re after, Kush Mints is here to deliver. A flavourful bud crafted by Seed Junky Genetics, this hybrid strain pulls evenly from her Bubba Kush and Animal Mints lineage. When you’re ready to let the cares of the day slip away, consider giving this gal a try.

Although an average THC level of 23% doesn’t sound like much, many note that Kush Mints packs a punch. Her nugs are fluffy and deep green, featuring a thick layer of frosty white crystals. As if her name didn’t already give it away, this bud is rich in crisp mint flavour but, surprisingly enough, incorporates notes of earth, coffee, and cookies into the mix as well. Her aroma is similar in nature, making her a preferred dessert strain for many.

If you’re expecting Kush Mints to be as refreshing as her flavour, you’d better think again. While some are counting on an uplifting and motivating set of effects, more often than not, users claim that this strain is relaxing both mentally and physically. You may not feel super stoned, unless you overdo it, but for the most part, a mellow happiness may permeate your body from head to toe. It should be mentioned that a large number of smokers say that Kush Mints has given them quite the case of the munchies, so stock up on snacks accordingly!

Evenly balanced hybrid strains are often popular for medical users as they tend to bring a nice mixture of cerebral and physical effects to the table. Kush Mints doesn’t disappoint, as many note that she helps to relieve anxiety and depression with relative ease. Physical pain may also be quelled as well as nagging cases of nausea. If your tolerance is low or you smoke a ton of this bud, she could help you to fall asleep too.

Kush Mints is quite possibly the most perfect after dinner strain around, as her flavors will mirror a sweet treat while her effects can help you to wind down before bed. While this strain certainly could be appropriate for more novice smokers, she’s best enjoyed by those who know what they’re doing. After a long day at work, grab your favourite junk food, plant yourself on the couch, and enjoy a mixture of mental and physical effects that are said to be unmatched by any other bud.

Kush Mints strain is available for same day weed delivery in Toronto. Not in Toronto? We got you covered. We offer same day shipping Canada-wide mail order marijuana.

Be the first to review “Kush mints – AAAA” Cancel reply