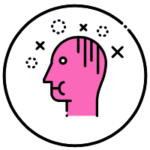 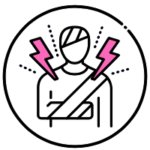 Said to be produced in Northern California within the marijuana-famous Emerald Triangle (a.k.a. weed capital of America), Trainwreck is a cerebral and body buzzing hybrid strain that is a cross between three potent and pure landrace strains, including Mexican sativa, Thai sativa, and Afghani indica. These three parental legends were dynamically combined, birthing Trainwreck as a result, which has a 65% sativa and 35% indica ratio.

Regular consumers of the Trainwreck strain have not reported feeling unaware of their body or out-of-control. Rather this reefer joins you along a journey through your own mind and body. Sporting a THC content of 18-26%, Trainwreck is one of the more potent strains on the market, often achieving top spots on “Strongest Cannabis Strains” lists. Few types of herb can match the genetic purity and intriguing effects of this delicious hybrid, known for its distinctive aroma and mood-enhancing, yet relaxing results.

As mentioned above, one of the characteristics that have caused Trainwreck to become such a world-famous strain is its distinctive and immediately identifiable aroma and flavor. The minute you crack open your storage jar, the scent of lemon-lime will overwhelm you and the room you’re in, but this version is unlike most other citrus aroma strains.

Topped with notes of menthol and acidic sourness, nothing about the Trainwreck name or appearance would lead you to believe that this is actually how it smells, but the result is pleasant and unexpected, acting somewhat as a surprise for first-time triers of Trainwreck weed. The flavor is likewise satisfying, giving off a semi-spicy or even peppery tang that zings and zaps the taste buds, waking you up with its charming, pungent taste that hits with earthy and woodsy notes after the initial impact.

Appearance-wise, you can tell Trainwreck produces a strong high just by looking at a single bud. The buds are often covered in a thick layer of frosty THC-packed trichomes, with little bits of resin that glimmer and sparkle each time the light hits it. The buds are beautiful with all their glam, but additionally, they are healthy and potent neon green in color. Sultry, brassy orange, and sometimes slightly red pistils curl and twist amongst the sticky frost and bright sugar leaves.

All in all, Trainwreck is known to produce effects that are more consistent with a traditional sativa, but it also has a tendency to melt the body, eventually converting its high into an almost sedative and sleep-inducing experience, after of course all the uplifting and energizing moments have taken place. Its name is sometimes experienced in a negative light, but unlike the implication, Trainwreck will not make you lose your mind, it might just alter time a little and produce light psychoactive effects.

Aside from hitting you quite hard with its potent high and immense THC content, Trainwreck is also well known for bending the mind and subtly altering reality (thankfully, nothing too drastic), especially in regards to the conceptualization of time and space. This might turn day-smokers off, for Trainwreck certainly might not be suited for a focused work type of environment, but a strain like this is sure to win your heart if consumed on a day off or later in the evening post work as a way to unwind and relax.

Trainwreck weed’s initial effects are energizing, euphoric and uplifted, which then melt into a full-body relaxation that keeps your mind whirling and introspective, followed by the onset of tiredness and maybe even the desire to fall asleep.

Overall, the Trainwreck strain is a quintessential addition to your afterwork pot stash, and can end up being exactly what you need after a long day is coming to an end.

It is debatable whether or not Trainwreck is capable of assisting individuals suffering from mental conditions such as anxiety. Overall, it seems that possibly depression, stress, and PTSD respond to this reefer, but those who have anxiety may want to choose a different strain for their medical needs. Many patient reports claim that this strain increased or even induced paranoia and panic attacks.

More than mentally, Trainwreck is wonderful at medically treating physical ailments, such as;

Trainwreck is a relaxant and can induce a jelly-like sensation over the whole body. This is something many prescription medications fail to do for individuals who manage massive amounts of pain and stress in their joints, muscles, tendons, bones, and more.

Trainwreck is bound to settle your body and uplift your mind, bringing you into another realm with its strong THC content that causes just a little bit to go a very long way. We hope you have enjoyed this Trainwreck review and that you not only found this article to be entertaining but also educational and informative. It is important to remember that the use of marijuana is the sole responsibility of the consumer and discretion should always be taken.

Read more about Trainwreck at Wayofleaf.com.

Be the first to review “Trainwreck – AAA+” Cancel reply